This magnificent, castlesque beachfront estate is known as Maison de l’Ocean. The project was initially planned to be a private residence, but construction was postponed so the owner/builder could focus on a nearby residential development project. Once the project was completed, the builder decided to retire and is now passing the baton on to someone else to complete Maison either as originally planned or to adapt and refine the concept according to their own vision. The structure measures roughly 20,000ft2 (2,000m2) and sits on 1 acre of titled land with approximately 270 linear feet (82m) overlooking the beautiful sandy beach below.

Whether Maison is finished as a private estate, a luxury hotel, or a tropical corporate retreat it is sure to be among the premier beachfront properties of the Pacific coast of Panama, if not of the entire Central American coastline.

Showings are by appointment only please.

Two homes on one lot and the best sunset views… 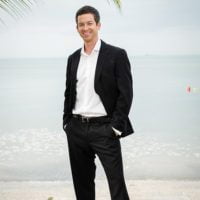