Apart from a destination for leisure and activity, the Cinta is also the scene for some of the best parties in town. Annual events such as Carnival and Pride Parade make use of this ample waterfront thoroughfare for their festivities. Regardless of the occasion, the Cinta Costera is the unique lifeblood of the city.

Whether you’re visiting Panama City, an ex-pat, or a native of the city, it’s hard to ignore this cherished public space.

So, how did the Cinta Costera come to be and what’s the best way to make the most of this urban planning wonder? Read on for everything you need to know about visiting and enjoying the Cinta Costera. ( Watch the video below or read on to learn more)

History of the Cinta Costera

Spanish for “Coastal Beltway,” this land reclamation project was completed in 2009. That’s right, the Cinta Costera is actually relatively new.

The beltway includes 64 acres of oceanfront land with plenty of outdoor activities and fun for the whole family. Before this massive renovation project, this stretch of Panama City’s coast was under-utilized. Nor was it a destination for leisure.

In the early 2000s, the government committed to spending almost 200 million dollars on the project. While it might sound like an astronomical bill, most would agree it was money well spent.

On any day and you’re likely to catch locals and visitors exercising and relaxing along this magnificent beltway. Additionally, it’s one of Panama City’s top tourist destinations.

Additions have been made over the years to add to the Cinta. Most recently, in 2014, the third extension of the Cinta Costera was completed. This project included an impressive loop around the Casco Viejo with water on both sides of the beltway. This final extension also connected the Maracana Stadium to the rest of the Cinta. Making it a great destination pre or post-game!

As expansions and upgrades to this project continue, the Cinta Costera becomes more loved by the people who call Panama City home.

Regardless of how you like to get your blood pumping, the Cinta Costera is the ideal place for recreational activities. Jog, roller-blade, downward dog, move, and shake it however you want. You’ll be doing it looking right out to the Pacific, all the way from Paitilla to Amador. Talk about unbeatable views!

The Cinta Costera isn’t just for pedestrians. 9km of palm-tree-lined wide trails and bike lanes await the fast, the furious.

Not so keen on getting around on wheels? Don’t fret! The Cinta Costera Panama is a great spot for everything from a brisk run to a leisurely stroll.

Looking for something a little more rhythmic? If so, you can attend a free Zumba, AeroBox, or yoga classes offered in the Cinta’s many public spaces.

You will also find playgrounds, workout stations, and tennis, volleyball, and basketball courts nestled between the green spaces. We really aren’t exaggerating when we say that the Cinta offers something for everyone.

Taste the Gastronomy of Seafood Marketing 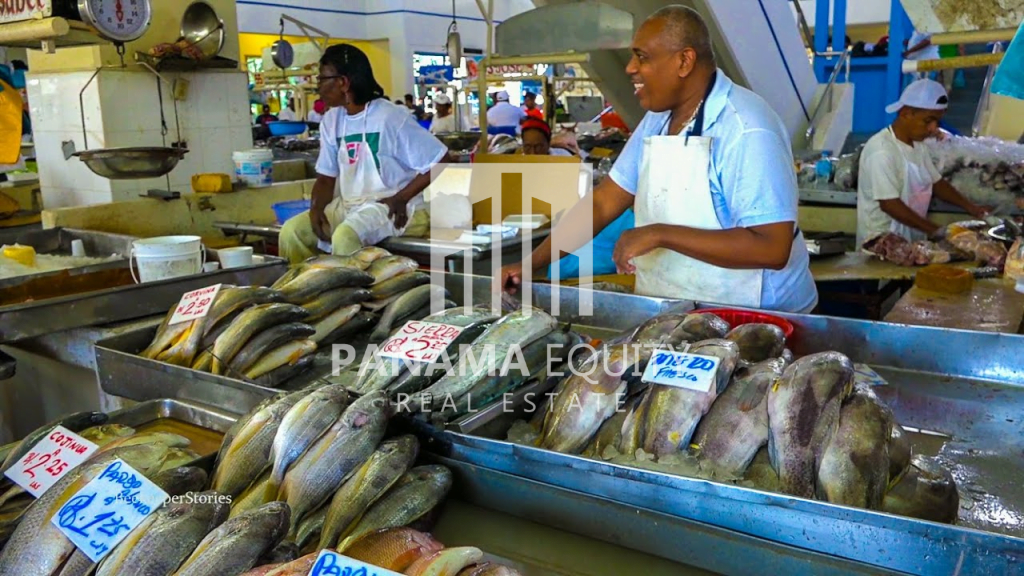 Whether biking, doing Zumba, or just people watching, you’re bound to get hungry with all that activity. Luckily, the Cinta Costera is also a great destination to grab some authentic Panamanian cuisine. The Cinta Costera has what is arguably some of the best, and some of the freshest seafood offerings in the City.

Visit the Mercado de Mariscos where the local fishermen unload the day’s catch and turn it to ceviche. Whether fish, shrimp, octopus, or any other fish delicacy, we can pretty much guarantee this will be the freshest ceviche! It also helps that it is super cheap too.

Locals all have their favorite stall that they think makes the best of the best ceviche. Our recommendation? Don’t take anyone’s word for it. Sample a cup from as many different vendors as you can. Hey, with all that activity, you’ve earned it. 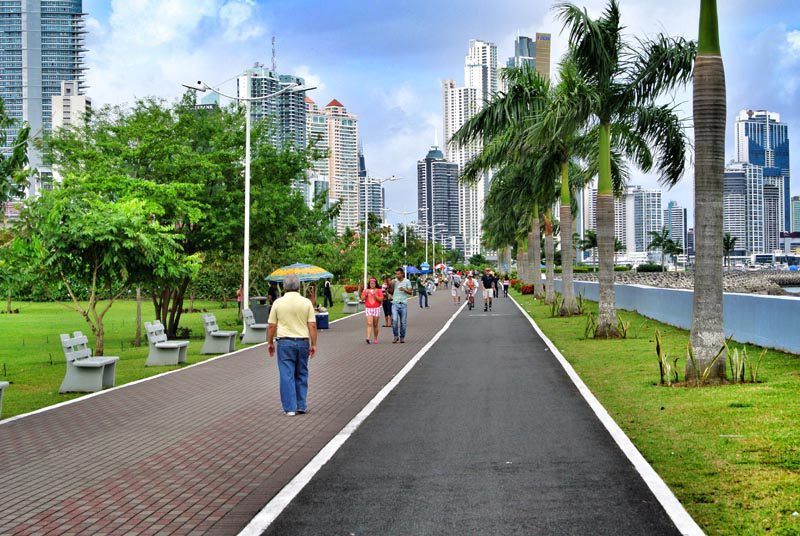 After a morning of vigorous activity and a lunch of delectable seafood, you might think it’s time to head home. You’d be wrong, though. The Cinta Costera is also a great place for leisure and relaxation.

The entire stretch of the coastal beltway is interspersed with manicured green spaces that are perfect for relax and people watch. Lush palms and park benches provide plenty of places to take a seat, enjoy an unbeatable view of the Pacific, and just watch the world go by.

Both tourists and locals alike also flock to the Cinta Costera for chances to snap some postcard-worthy photos. The entire 9 km stretch of coastline affords stunning backdrops of the Pacific Ocean. At the southern end of the Cinta Costera, you can also catch great shots of Panama City’s iconic skyline, while the newest additions to the beltway show off views of Casco Viejo.

Special Celebrations on the Cinta Costera 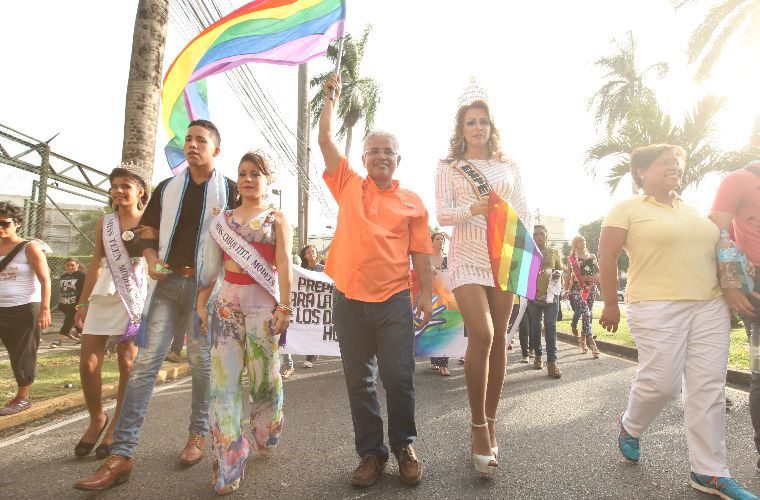 The Cinta Costera is a lively destination in the city at all times of the year. It’s often abuzz with street vendors, fairs, and performances. There are certain times, though, that the Cinta transforms to accommodate large festivals and parades. The second week of December every year finds the Cinta bursting with Christmas spirit. The entire beltway is typically closed for a full weekend to host a parade and celebrations with food, music, and fun.

The celebration is even bigger for Carnival which typically takes place in late February or early March. When it comes to Carnival, Panama means business and nowhere is as happening as the Cinta Costera. The street is mostly closed to traffic for a full four days. Instead of bikers and joggers, the beltway is packed with music, dancing, drinks, and revelry. Parades roll up the Cinta and Panamanians enjoy one of the most vibrant times of the year.

A final tradition that makes use of the Cinta Costera is Pride Week. For the past several years in late June, the LGBTQ community of Panama City takes to the Cinta Costera to celebrate this international day of pride. In this case, the festivities are mostly confined to the area of the Cinta that is closest to Casco Viejo. While the parade might not be as long as those of Carnival, it still has plenty of energy, and the Cinta Costera is the center of the action.

Making the Most of Your Visit

There really isn’t a wrong time to visit the Cinta Costera. From dawn to dusk and every day of the week, you’ll have plenty of space to safely enjoy the beltway. During the workweek, mornings and evenings are busy with locals getting in some physical activity before or after work. During the middle of the day, you’ll often catch visitors taking in the views or pedaling along on rented bikes.

Don’t forget – Panama can be hot. While there are some areas on the Cinta with shade, there are plenty without. On sunny days you’ll want to bring a hat and water and wear sunscreen if you plan on spending much time on the Cinta Costera particularly at midday.

On the weekends, crowds flock to the Cinta at all hours of the day. Sunday afternoons are particularly popular since several lanes of traffic on the Cinta Costera are closed to cars on Sundays. It’s a perfect way to take in the city as it wakes or spend time with friends and family. Get there earlier enough, and you might even see the fishermen bring their crates into the market.

Regardless of when you visit or how you choose to enjoy this feat of urban planning, don’t miss out on what is easily one of the most beloved parts of Panama City. The Cinta Costera really does offer something for everyone.

What an awesome apartment in the Casa Art Deco building…

This fabulous property is located in one of Panama’s most…

Relaxing from home takes on a whole new meaning in…